Workforce Automation Is Even Easier With the Doosan A-Series Cobot 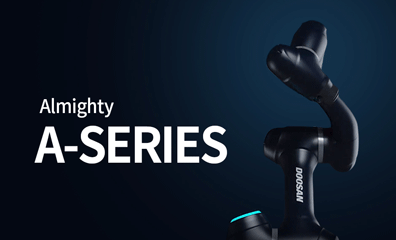 The fourth industrial revolution is upon us with 75 million more human jobs to be replaced with smart robots more capable than ever by 2022. Advances in robotic manufacturing are taking an already competitive manufacturing industry into an age of innovate or die. Workforce automation is nothing to fear and most experts agree that more advanced robotics augmented with AI will liberate our workforce, not destroy it.

Exciting new products were introduced in 2020 including the Doosan A-Series Cobot. This new series from Doosan takes Mobile Industrial Robot (MIR) technology to the masses with the best performance at an affordable price.

Are you curious as to how this manufacturing beast can potentially multiply your production and reduce costs at the same time? Keep reading to find out what’s new with the A-series and why this high tech robot is a game-changer.

The Doosan A-series is a fully mobile, customizable, and extremely versatile intelligent MIR robot. Doosan has already earned a reputation as an industry leader with its M-series cobots and was released at the same time as their ground-breaking H-series for high power heavy lifting and long reach cobots used mainly in pallet loading and unloading tasks. The A-series has all the functions and capability we have come to expect from Doosan with increased performance for the applications of:

Doosan Robotics™ stands out from the rest with the industry’s best speed in its class performing a variety of applications. Anywhere on the assembly line for almost any task this cobot is up to the challenge.

The business of manufacturing doesn’t have set margins. Any increase in efficiency has the power to drastically increase profits. The A-series cobot promises manufacturers solutions to their production needs from day one.

Doosan Robotics has always put safety first. The new series is safer than ever. They have developed in-house a proprietary AI algorithm that ensures the safety of operators up and beyond the limits of the previous current-based collision detection.

The series A Doosan cobot meets the requirements for category 4 (PL e Cat 4) of interlock architectures control reliability. Category 4 is the most reliable of systems safety protocols including emergency stop safety functions, guards, and interlocks.

The world-class robotics technology used to manufacture the Doosan A-series delivers flawless performance with the highest speed of comparable robots in the same category. Not slightly quicker either, these cobots have twice the joint speed of the competition. You don’t have to be a math genius to figure that means twice as much production in the same time period.

To ignore progress means going nowhere in the manufacturing industry. Workforce automation is much less a trend but a continuation of progress that is sure to shape the future of market competition in every manufacturing sector.

Is your company ready to make the leap to a more efficient and ultimately more profitable manufacturing venture? Contact us today and we will explain how Proud Automation can offer your company the product training and technical support you will need to take your operation to the next level.