Overcoming the challenges of developing an Autonomous material handling system between subassembly and final assembly areas. 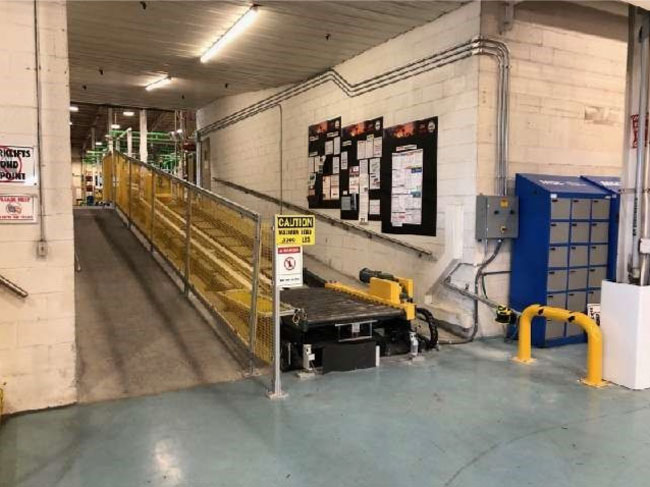 A global manufacturer of heavy equipment was looking to automate the transportation of material between two areas within its Central PA based manufacturing facility.  The plant has significantly grown since the facility was first built decades ago.  It was built into the side of a hill so as square footage was added, the new buildings were constructed at an elevation that was different from the older parts of the building.  The buildings are connected via ramps but the 10% slope of those ramps made it impossible for material handling equipment to use them as a means of transporting materials within the facility.

The current process for material transport between subassembly and final assembly areas was very manual and inefficient.  The ramp that separates the two areas measures 35 feet in length and has a 10 degree incline.  Because of this the ramp was historically limited to foot traffic only.  Due to the size and weight of the subassemblies, all material has always been transported by forklift.  However the only way for a forklift to travel between subassembly and final assembly was to exit one building through a large overhead door, travel across pavement and reenter the other building through another large, overhead door.  This path of travel became the only way to get from one area to the other.  This meant that fork trucks traveled outside, carrying materials, no matter the temperature and weather conditions.

The customer understood that this was an inefficient process and was interested in a way not only to retain material transport within the buildings but also to do so in an automated fashion.

The customer’s requirements were to move a multitude of products ranging in size, weight and dimension from multiple pick up locations in subassembly and drop off to several locations in final assembly.  These items would be transported in totes approximately the size of a standard pallet. Empty totes needed to be returned from final assembly to the appropriate area in subassembly.  The solution would have to eliminate the need to travel outside. The max payload that was to be transported between the areas was not to exceed 2000 lbs.  The system needed to seamlessly integrate with their production planning system which would determine when and where materials were needed to move from one area to the other.  The solution needed to be flexible and adaptable to ongoing production floor layout changes. 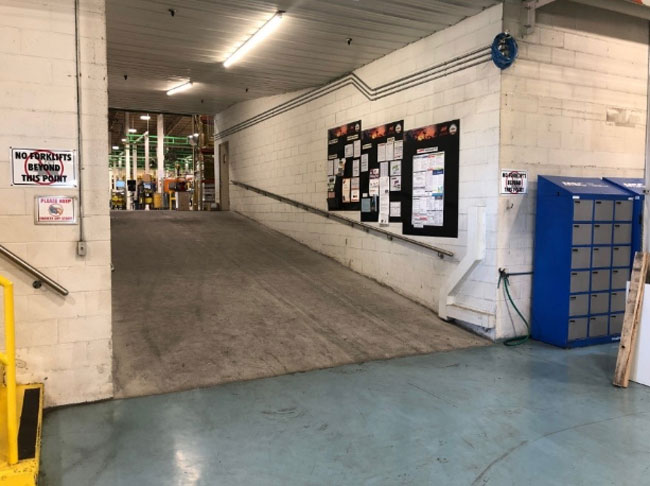 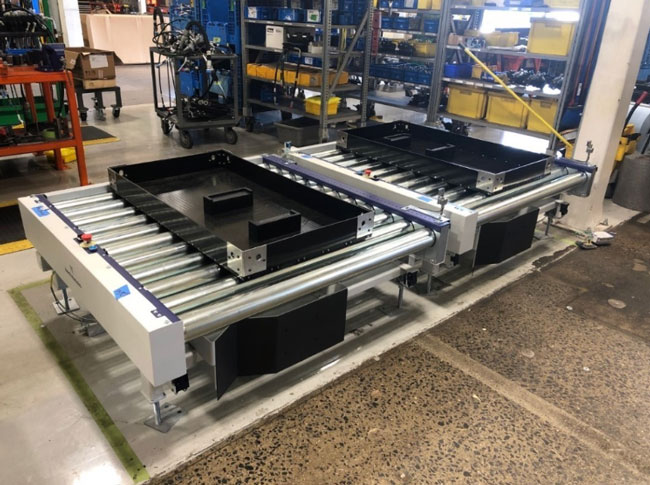 RG Group’s Industrial Automation team developed and implemented a concept that exceeded the customer’s expectations.  The concept involved the following:

A 1000kg (2200 lbs) payload autonomous mobile robot from Mobile Industrial Robots was designated to the subassembly area. The AMR was outfitted with a roller conveyor top module from Nord Modules, that allowed totes to be transferred from the staging area conveyors to the AMR. 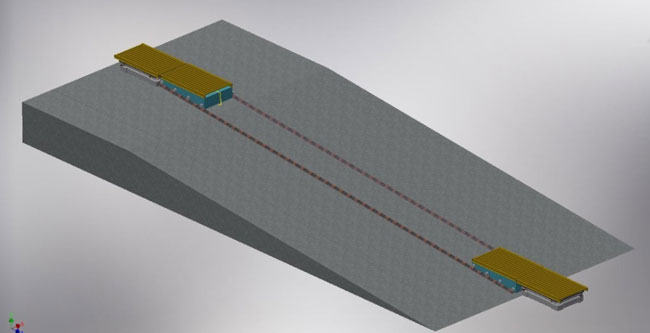 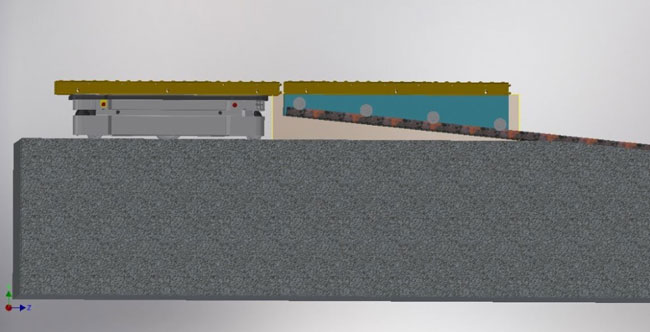 A duplicate 1000kg (2200 lbs) payload autonomous mobile robot from Mobile Industrial Robots was designated to the final assembly area. The AMR was outfitted with a roller conveyor top module from Nord Modules that allowed totes to be transferred from the lift mechanism to the AMR which would then deliver the material to its final destination. 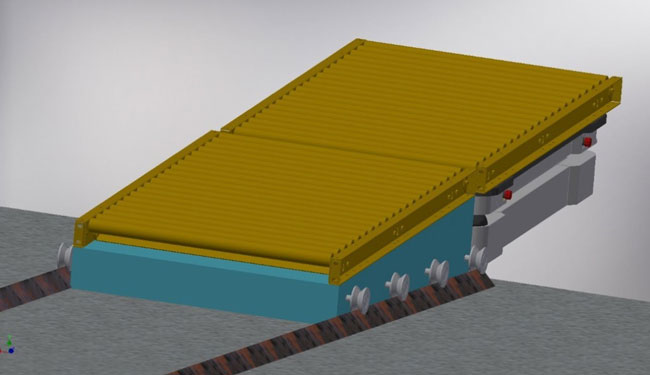 Fleet and Process management – An MQTT server-based software application developed by RG Group would act as the conduit between the mobile robots and the customer’s production planning system and manage the traffic and flow of material. This software application would allow the material to move seamlessly from pick up to drop off without any human interaction. It would manage the fleet of robots as well as manage the logic needed to control the lifting mechanism on the ramp. 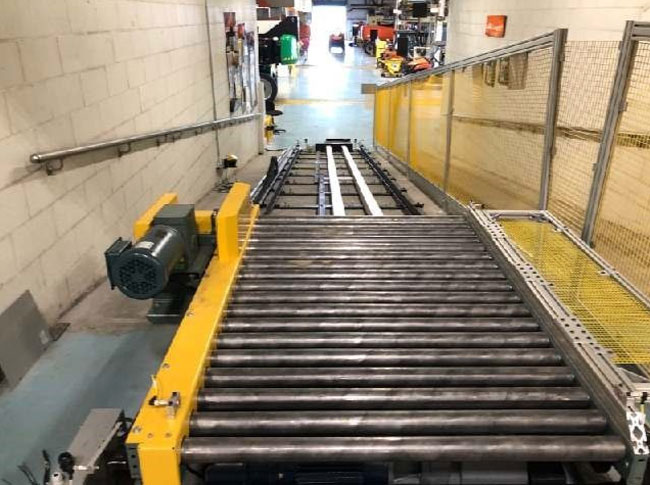 Engineering, deployment and support – In addition to providing the items described above RG Group provided onsite services to ensure a successful installation and system deployment. We mapped and configured the AMR’s and all of the points of interest like pick up and drop off locations. We provided oversight on the installation of the lift mechanism. We provided onsite engineering and commissioning of the system and provided basic user and technical training for the customer. 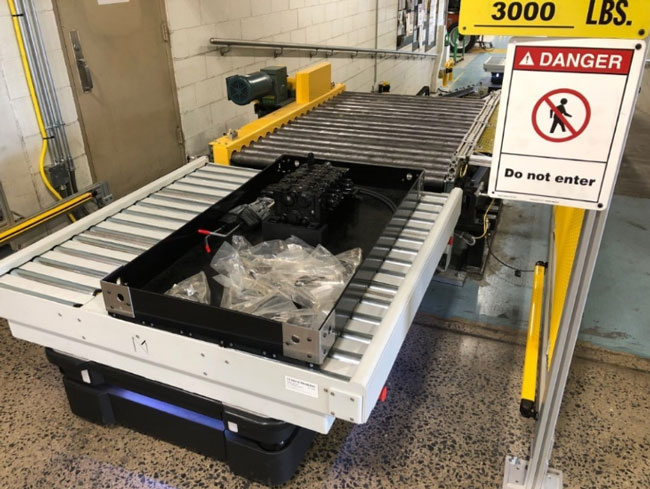 The customer had received proposals from other solution providers, RG Group was the only integrator that was able to use their existing ramp without causing major changes to the layout of their plant’s footprint. It was our ability to leverage COTS technology like the MiR AMR’s and roller conveyor top modules along with a completely custom engineered lifting mechanism and fleet management software application that delivered a spot on solution for this customer.

Let us help you find the right solution for your working environment. Contact Proud for more information.